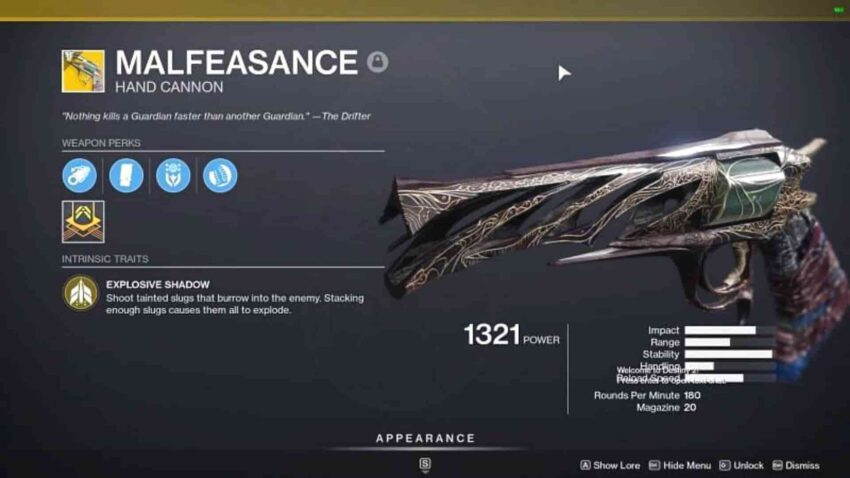 It’s very effective against Taken foes, making it an excellent weapon for activities like Gambit or The Reckoning. we have discussed Destiny 2 Malfeasance Buff.

Although this is a pleasant weapon, the Malfeasance is a gun that supporters have already been begging Bungie to enhance and give it a catalyst for a long time. It’s very effective against Taken foes, making it an excellent weapon for activities like Gambit or The Reckoning, although it’s surpassed by other exotics and even certain legendary weapons outside of it. The fundamental reason is that the weapon’s time to kill does not occur prior to the burst explosion. Today in this article, we have discussed about Destiny 2 Malfeasance Buff.

In PvP, the player is most likely already dead from another weapon at that moment. Malfeasance is a rare Handheld Pistol debuted in Forsaken and obtained via the Seething Heart Quest. When an adversary is struck with a shot, all of the slugs in the target explode, dealing tremendous damage to the victim as well as minor damage to nearby adversaries.

The first stage in starting The Seething Heart is to murder an Ascendant Primeval Servitor. This monster, affectionately known as The Meatball by the community, is a rare Gambit boss that appears exclusively in the second and third rounds of a battle. To get the Malfeasance exotic hand cannon, your squad must beat and win the round against the Ascendant Primeval Servitor.

The Mission Arc Against Malfeasance

When the Seething Heart questline opens, players are instructed to hunt for the Drifter. The next phase in the mission is to investigate the Dreaming City for clues about the thief. The mission requires the player to fight 25 Taken bosses or minibosses in the Dreaming City. The Blind Well, notably the Tier 3 and Heroic Blind Well events, is a wonderful place to start. Because there are so many Taken opponents in this area, the phase may be finished fast. Another option is to load up the Corrupted Strike, which has a large number of Taken opponents.

Complete a specific variation of the Corrupted Strike in the Dreaming City to unlock Malfeasance. This Strike will lead you to Callum’s tomb, which was found before Malfeasance was ever accessible. After clearing this Strike, players must return to Drift in the Tower to acquire the next phase.

The last quest stage for unlocking Malfeasance is to obtain 25 invader or invasion kills in Gambit, which may be accomplished by either invading the opposing team or killing an invader. This stage can also be fulfilled in one fell swoop by invading and killing all four players at once. Players can also earn points for this activity by assisting their allies. You will gain one-third of the rewards if an ally invades and wipes out the opposition team. Return to Drifter once finished obtaining the Malfeasance Exotic hand cannon.

Darkness in the Light, a Malfeasance quest path, let Destiny 2 players seek down and obtain this nefarious Exotic hand cannon. Given information on Destiny 2 Malfeasance Buff is very useful for everyone. If you want to know more information Destiny 2 game then click here: The Gaming Guider