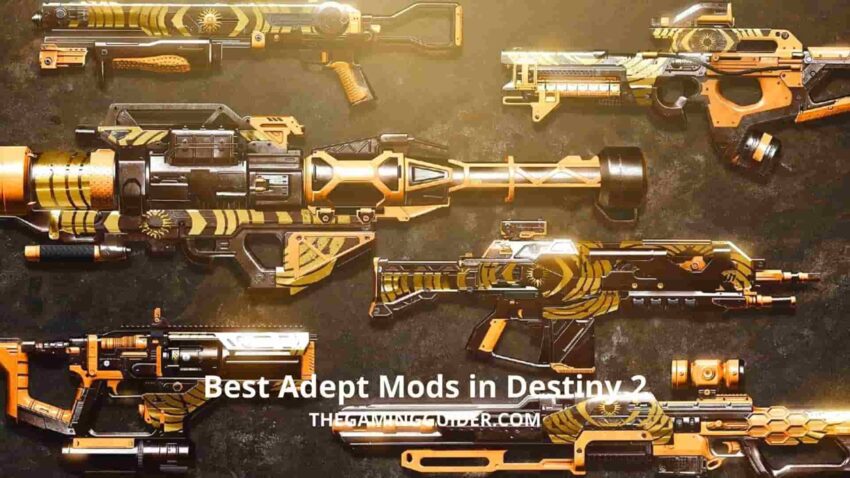 Beyond Light saw the joyful return of Destiny 2’s adept customizations and weaponry. These weapons were essentially elemental variations of their normal counterparts in the original Destiny. They’ve now been tweaked to work a little differently, increasing their total numbers to make them significantly more lethal Exceptional firearms. In this article, we are discussing Best Adept Mods in Destiny 2.

Adept munitions are stronger variants of current Legendary weaponry. When weapon types were confined to certain slots in the original Destiny, these would often add an elemental burn to a Primary weapon. They are now the same weapons with improved stats. The only catch is that you must Masterwork the weapon after acquiring it to get the stat boost.

This will grant you a +10 bonus to the random Master worked stat and a +3 bonus to all other stats. Unfortunately, there are no special Perks associated with each weapon, so you’d have to keep attempting to unlock different variants of the same weapon to get what you desire.

How else to Acquire Adept Weapons in Destiny 2?

When Beyond Light Reintroduced Adept Weapons, the only way to get them was to complete a Flawless Trials Passage in the Trials of Osiris. You were able to reach the Lighthouse and open a faultless chest as a result of this. They’re only accessible every two weeks, thus not every run will result in Destiny 2 Adepts Weapons in Trials.

For those who choose not to engage in PvP, Nightfall now offers the chance to obtain Destiny 2 Adept weaponry. Grandmaster Nightfall: The Ordeal, to be exact. To stand a chance when this event cycles in, you’ll need to attain the maximum allowable brightness levels and wear your upper-end gear.

To increase your chances of receiving an Adept Weapon in Destiny 2 PvE, you’ll need to kill every Champion and reach Platinum level. Unfortunately, this does not ensure a gear unlock, so you may need to perform Nightfalls numerous times to achieve the Weapon Perks you desire.

What Exactly Are Adept Mods?

One advantage of performing several plays of Testing of Osiris or Grandmaster Nightfalls is that you can gain Adept Mods. Best Adept Mods in Destiny 2 are more like Masterworked statistics than regular Mods. They will grant significantly greater stat enhancements for specialized weapons, resulting in a +10 for standard stats. Magazine Size and Accuracy, on the other hand, will receive a significant increase at the price of a penalty.

It’s important to remember that any Adept Mods you equip in Destiny 2 will take the place of a Standard Mod. In most circumstances, this will be advantageous. However, if you have Perks like Dragonfly or Icarus Grip, you might not want to utilize Adept Mods.

What to Do to get Adept Mods?

Unfortunately, these Mods will not be available until you have acquired your first Adept Weapon, and even then, you will only be able to unlock Mods for that single weapon type. Mods, like Adept Weapons, will cycle in and out of the Grandmaster Nightfalls and Trials. The one advantage is that you will have a smaller loot pool to deal with, making it easier to get particular Mods.

Best Adept Mods in Destiny 2 are playable in both modes. The sole one-of-a-kind Mod, Adept Big the One’s Configuration, is accessible only in Grandmaster Nightfalls. So, keep an eye out for whatever Mods and weapons are available and attempt to fight for them until you have the diversity you desire.  If you want to know more information Destiny 2 game then click here: The Gaming Guider