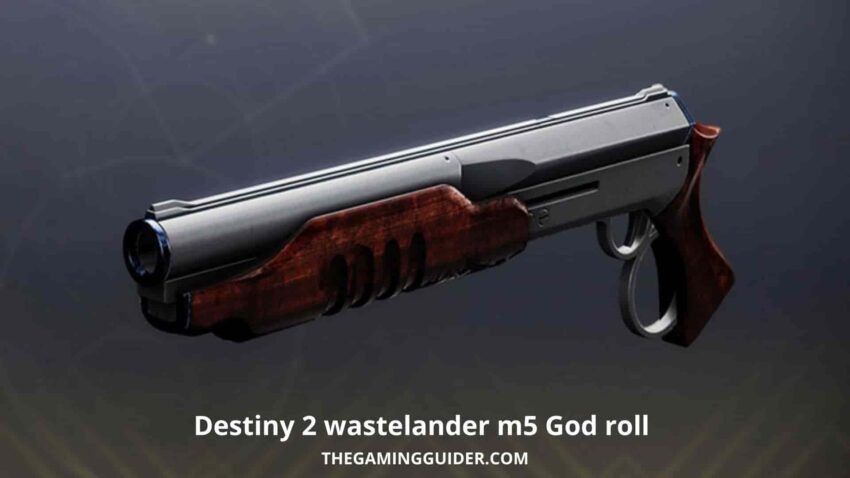 What is the Wastelander M5 God roll?

Let us just take a closer look at the PVE God Roll Wastelander M5, a kinetic shotgun introduced as part of Bungie’s 30th Anniversary Event. Destiny 2 Wastelander m5 God roll is a light frame with a 65 impact. It’s a shotgun with an RPM of 80. This roll improves control, reduces the need to reload, and increases melee damage. Here is the Wastelander M5 PVE God Roll.

The Wastelander M5 is an ancient forgotten rifle that has made its way into Destiny 2 as part of the 30th Anniversary Celebration Event. It is a Shotgun with a Lightweight Frame and features such as Perpetual Motion, Ensemble, and Adagio. Furthermore, its remarkable mobility makes it one of the most popular firearms among gamers.

What is the Obtaining Process of Wastelander M5 God Roll?

Obtaining this shotgun is not as tough as one might imagine, since it merely needs the completion of the Dares of Eternity event and the collection of Treasure Keys. Once you’ve obtained a key, all you have to do is go to Xur’s Treasure Hoard and interact with the white chest on Xur’s platform. At the expense of one key every drop, it is prudent to keep a few keys on hand, as the nature of the treasure box is utterly unpredictable.

The Party Against God Roll for Wastelander M5?

It’s a shotgun with Slideshot and Opening Shot capabilities. If you’ve played even one crucible game in the previous year, you’ve seen and been killed by this same combo of perks multiple times. Despite having the same god roll as the aforementioned Felwinter’s Lie, the M5 falls short. You’re not going to win duels against good shotgun players with Felwinter’s merely because it outperforms the Wastelander in terms of one-shot kill range.

So, if you want the best results with the least amount of work, just purchase yourself a Felwinter’s Lie from the exotic kiosk. If you’re feeling adventurous and want to try something new, this is the Destiny 2 Wastelander m5 God roll for you. Following down we have listed some god rolls perks and their small uses intro. Go through it: –

If you keep the preceding approaches in mind for obtaining the Wastelander M5 and the God Roll, you will have no problem at all.

The Wastelander M5 is a nod to Marathon 2’s WSTE M5 rifle. Gamers in Marathon 2 can present a double WSTE M5. If you want to know more information Destiny 2 game then click here: The Gaming Guider