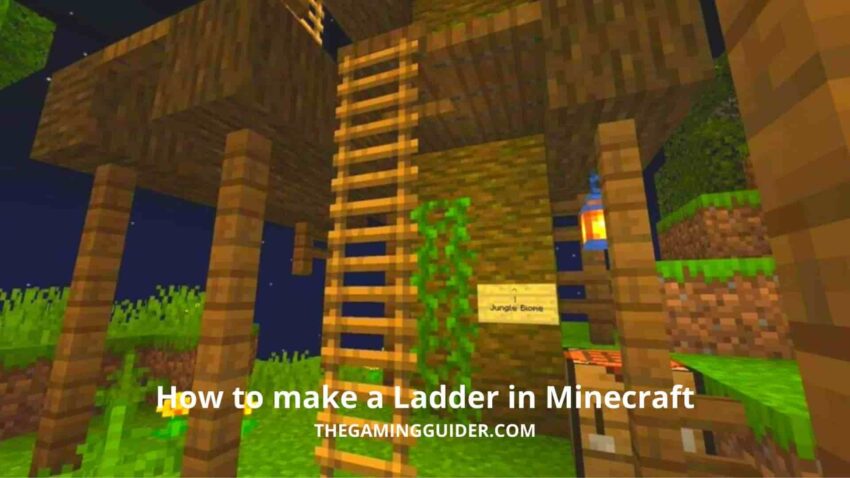 The Ladder is a wooden block that is used to build climbing walls. This post will teach game enthusiasts How to Make Ladder in Minecraft? using a step-by-step approach.

If you wish to design a house with numerous stories, you will have the option of using ladders or steps to move up and down. Ladders are useful because of the amount of room they can save you.

The majority of stairs require a whole wall or a 3×3-5×5 area for a spiral step. Ladders save space, and while they aren’t the most visually beautiful, they may provide some use to your home or construction.

Materials Needed to Make a Ladder

Before proceeding, the Minecraft player must gather the necessary recipe components for constructing Ladder. The following are the specific items that are necessary: –

In Minecraft, here’s how to build a ladder?

By reading this section, you can easily understand How to Make Ladder in Minecraft? An individual must first enter the crafting menu and then add the objects needed to create the crafting grid. Make sure the crafting table is a 3X3 crafting grid before you start making anything.

To create a Ladder, a player must combine all of the things he has acquired in the crafting grid. Those goods must be properly arranged. Sticks should be placed in the left and right boxes in the first row of the grid.

In the second row, each box should have one stick, however, in the third row, sticks should be placed in the left and right boxes. A Ladder would emerge on the screen after the proper filling.

When the Ladder is complete, the player must move it to the inventory box to use it.

Ladders are quite simple, but there are a few oddities to be aware of. A ladder and a trapdoor, for example, cannot be placed on the same wall.

If you want the trapdoor flush with the floor, your ladder just has to reach just under the block where you put the trapdoor. You’ll have to leap to go from the ladder to the top, but this approach isn’t as bad as utilizing a ladder and a trapdoor.

Once your ladders are in place, you may step into them and gaze up to climb upwards. If your trapdoor is flush with the floor, you’ll need to push yourself towards the ladders when you reach the top, then jump from the top ladder up to the trapdoor level.

In Minecraft, how do you make stairs?

Effects of Ladder in Minecraft?

Ladders first appeared in Minecraft in June 2010. Sticks are formed by wooden sticks. Ladders have the following characteristics: they can withstand two explosions at most, they are stackable. If you want to know more information MINECRAFT game then click here: The Gaming Guider