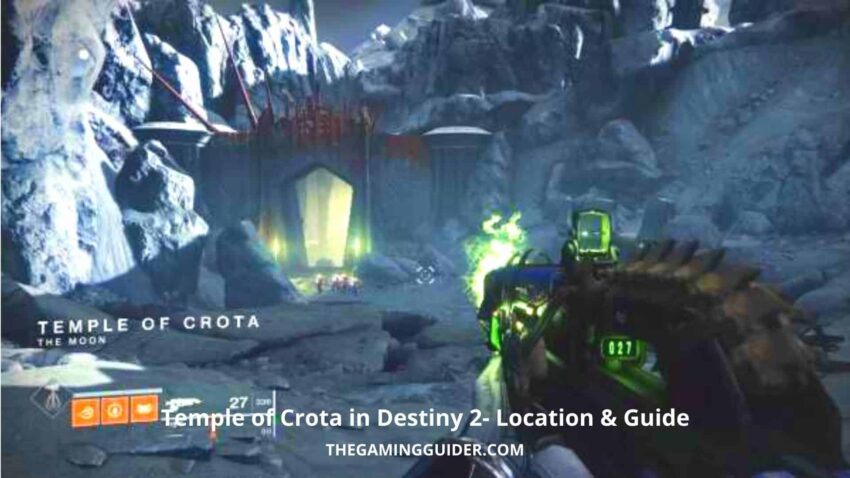 Temple of Crota in Destiny 2 is a swarm formation in the “Ocean of Storms” on the moon committed to their god crota. From the surface, it leads to the catacombs, where a number of the Hive’s seeding spaceships may be found. To discover Crota Temple, you’ll need a little bit of luck. This new region in Destiny 2‘s Shadow keep addition, The Moon, contains several secret locations, and Ethereal Charms are one of them.

Even if you don’t buy the expansion, you may still reach the Moon by completing A Mysterious Disturbance, which is the first objective in the Shadow keep campaign. This is where the story begins.

In the Sanctuary, there are two landing zones – Eris Morn and the Lectern of Enchantment, which are both accessible as you go through the Shadow keep narrative.

These include Archer’s Line (west), Anchor of Light (east), and Hellmouth (middle), as well as several smaller zones. In each, there is an entrance to the Moon’s subterranean areas.

First, you must go to the Moon to find the Temple of Crota in Destiny 2, a new location in Destiny 2, but one that will be familiar to long-term players. Start by spawning at the farthest southern waypoint on the map, which is near Sanctuary. As far as we’re concerned, it’s the fastest way to get there.

From here, you’ll want to head east until you reach the Anchor of Light, which is located in the middle of the map. Follow the path to the east, avoiding hostiles and debris, until you reach a tiny valley.

In the temple itself, you can proceed if you’ve either dispatched or bypassed the guardians. Temple of Corta is difficult to locate, as it is

Is it possible to conquer Crota’s nightmare?

Stop Crota, son of Oryx, the nightmare. The hero lands on the moon and tries to find Erin Morin, but is unsuccessful. Rather, discover the enormous pyramid and the nightmarish Hive instead. It’s possible to take down Crota Son of Oryx using a sniper rifle.

How Can You Obtain the Essence of Greed?

This Essence may be cleansed by completing patrols, events, and Lost Sectors across the Moon. Use Machine Guns to fight opponents and acquire Ethereal Charms at the Temple of Crota.

It’s time to clean up Greed’s Essence by going to the Lectern of Enchantment. The A Fine Memorial is a powerful machine gun with a big magazine capacity as a prize for your good work.

Patrols on the Moon differ slightly from those in other locales. Rather than using a beacon, the player has to engage with Nightmares of a variety of Guardians instead. Toland, who resembles a white wisp, accepts the Scan patrols. if you want to know more information about the Destiny 2 game then click here – The Gaming Guider